When providing an API to developers, there are different levels of compliance that a vendor can expose.

Many developer sites have an Effective Usage document. These are guidelines by convention, not strictly enforced by a compiler or API. For example, I often use the effective dart guidelines.

The influence of the effective usage guidelines can be greatly increased by the enforcement of usage within linter rules.

The linter works with static analysis technology that the IDE generally presents.

You have the option of ignoring rules or setting the level of strictness for compliance.

With Dart development, the issue of compliance versus guidelines is coming up for me frequently as I am learning about null safety.

This morning, I read through a section of Effective Dart that solved a problem for me with null variables.

The relevant section is below.

AVOID late variables if you need to check whether they are initialized.

Dart offers no way to tell if a late variable has been initialized or assigned to. If you access it, it either immediately runs the initializer (if it has one) or throws an exception. Sometimes you have some state that’s lazily initialized where late might be a good fit, but you also need to be able to tell if the initialization has happened yet.

Of course, if null is a valid initialized value for the variable, then it probably does make sense to have a separate boolean field.

CONSIDER copying a nullable field to a local variable to enable type promotion.

One pattern to work around this is to copy the field’s value to a local variable. Null checks on that variable do promote, so you can safely treat it as non-nullable. 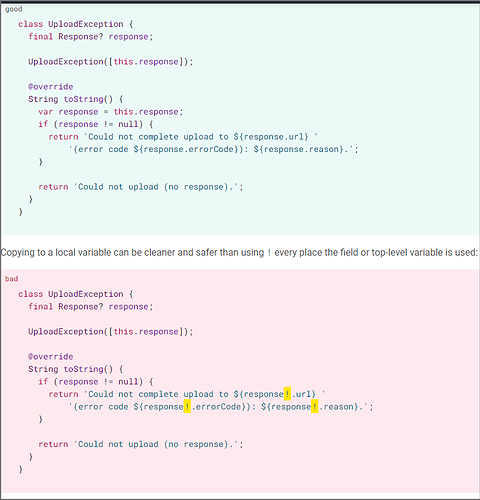